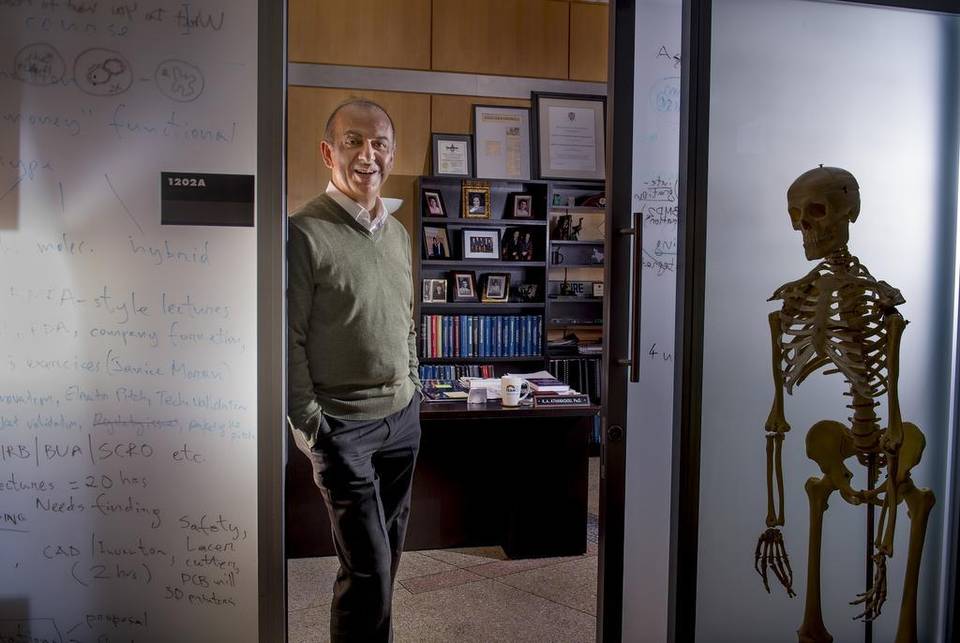 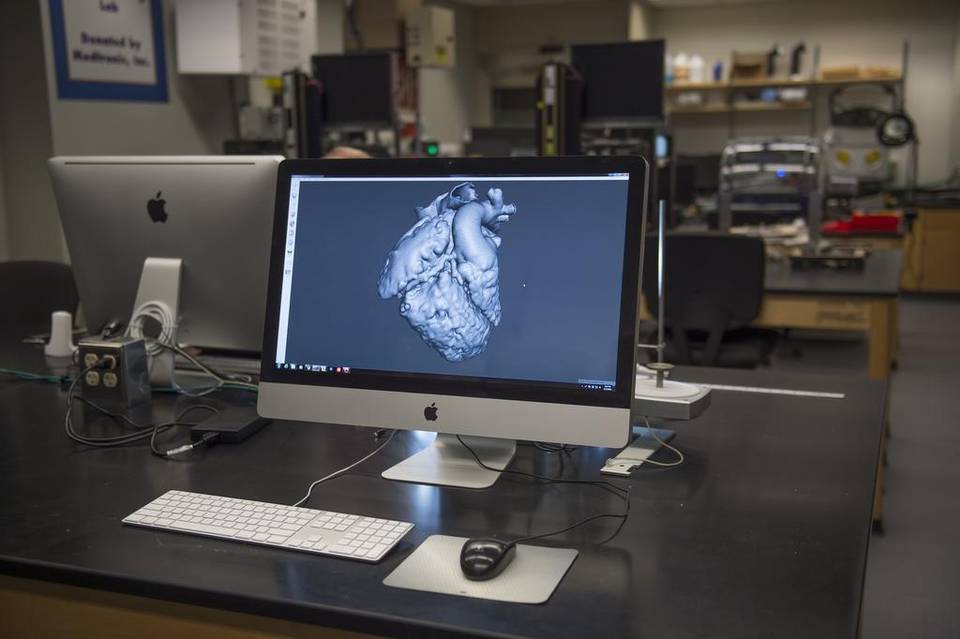 Physicians can feed patient scans to the UC Davis TEAM lab, which prints out 3-D models of hearts, bones and more. The models take 10 to 14 hours to print. José Luis Villegas jvillegas@sacbee.com 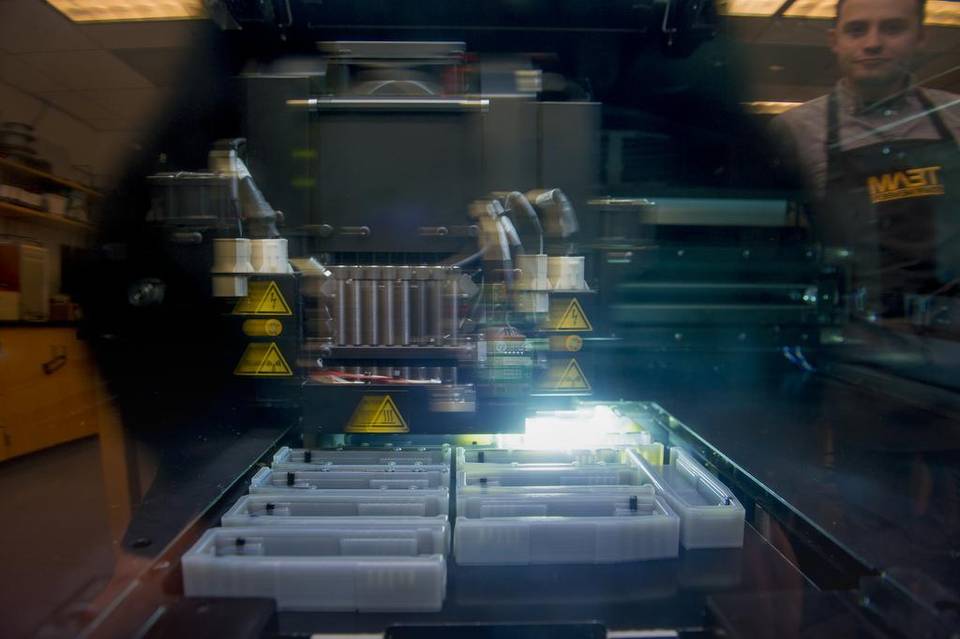 A three-dimensional printer produces replicas of a patient’s organs and bone structures to give physicians to better look at the problem before surgery. José Luis Villegas jvillegas@sacbee.com

This model of a 19-month-old’s heart was produced by a 3-D printer at the UC Davis TEAM lab. It allowed the operating physician to study the complex congenital heart defect and plan for surgery. José Luis Villegas jvillegas@sacbee.com

UC Davis physician Gary Raff was treating a 19-month-old with a congenital heart defect this January when he realized he had reached a rare crossroads – he wasn’t sure what to do next. The girl had a complex constellation of arteries coming off her heart and only 1 1/4 ventricles rather than the usual two.

Having already looked at her CT scans, the pediatric cardiothoracic surgeon put in a request for something different, and unlikely just a few years ago. He ordered up an exact replica of her heart made of flexible plastic, created by three-dimensional printing technology at the Translating Engineering Advances to Medicine, or TEAM, laboratory on the university’s campus.

Such organ models are among the newest medical innovations made possible by the burgeoning, but expensive, printing technology, providing a dramatically different perspective on difficult cases, Raff said. In the operating room, the models can offer crucial information on how to proceed, or whether it’s safe to operate at all.

“There’s just something about having a model in your hands and being able to go over in your head and with the family,” he said. “It doesn’t have the same tactile feel as the actual organ, but I don’t need it to. What I really need is to be able to see if one or the other approach I’m thinking about doing is reasonable. Almost always that comes down to being able to look at adjacent structures and figuring out what to do with those structures.”

Being able to work with the printed model helped Raff develop plans A, B, C and D and choose a safer and more efficient route than the one he was initially considering. Raff successfully performed his young patient’s aortic translocation, a removal of an obstruction under the pulmonic and aortic valves.

Once used at only a handful of hospitals, the models are now becoming a staple of pre-surgical planning at most major academic medical centers, said Dr. Tatiana Kelil, a radiologist at Brigham and Women’s Hospital in Boston. Kelil helped found 3D Print for Health, a small online think tank that researches how 3-D printing technology can benefit patients.

“If (surgeons) are prepared ahead of time, it helps them reduce operating room time,” she said. “That’s less complication for both patient and surgeon.”

Typically, surgeons study patient cases by looking at radiological imaging such as two-dimensional CT scans and MRIs. At many hospitals, those images can be fed into a computer program that projects the organ or other structures on a digital screen. Physicians can then change the angle of the organ and highlight or remove layers to get a better look at the area needing attention.

A physical model, by contrast, allows physicians to hold a mock-up of a patient’s organ in their hands, turn it over, probe it and come up with a treatment strategy, said Kyriacos Athanasiou, distinguished professor of biomedical engineering at UC Davis and director of the TEAM lab. The difference is both the quality of the reproduction and the ability to touch and feel it.

“We can print it out, at a higher magnification and with more detail, to see any structural defects that may exist,” he said. “That allows one to think the problem through before they go to sleep at night, not there when they have an open heart staring at them – obviously that’s a huge advantage.”

Engineers at the lab have been creating personalized, medically accurate models for UC Davis veterinarians since the facility opened in 2014 but have only recently begun offering the service for human patients. In some cases, studying the models has prompted physicians to completely forgo surgery, if it appears too risky.

“We’ve printed hearts, jaws, livers, femurs,” said Steven Lucero, development engineer at the lab. “And we want more. We want everyone to know that they can use this for pre-surgical planning, if they think it’s a good fit.”

“It’s an example of how to apply the different technologies and really, at the end of the day, mitigate risk for the patients and reduce the number of operations and other procedures that they can potentially need in their lifetime,” Raff said.

“While 3-D printing technology is commonly used to design and create medical tools, it’s been used for pre-surgical planning in only a few places,” Athanasiou said.

That’s partially due to the time and cost associated with making each model, he said. At the TEAM lab, the 3-D printers cost about a quarter of a million dollars apiece, plus the cost of material. It takes two to three hours to process imaging into a format that the 3-D printer can digest, depending on the complexity of the case, Lucero said. Once printing begins, it might be 10 to 14 hours before the model organ is completed.

“We want to try to do this in a responsible way so we don’t increase the cost of medical care,” Raff said. “It’s the kind of thing where we’re going to use it in situations where we feel it’s going to make a big difference.”

For Raff’s infant patient, the technology proved a great aid. The little girl is doing well now, he said, and the family even took home the 3-D model of her heart from the TEAM lab.

“I asked them if they’d like to have it since it saved their daughter’s heart,” he said. “They were not expecting it, and they thought it was great.”