Tissue engineering strategies to treat ischemic vascular diseases have to overcome a big obstacle: the sustained delivery of agents that promote angiogenesis.  Sphingosine-1-phosphate (S1P) is a bioactive lipid that recruits endothelial progenitor cells (EPCs), which form blood vessels, and encourages overall therapeutic angiogenesis within damaged or blood-deprived tissues. In angiogenesis research, use of growth factors or cytokines has overshadowed S1P, even though it is known to be a powerful regulator of neovascularization in both tissue development and repair and is a crucial mediator of EPC trafficking. 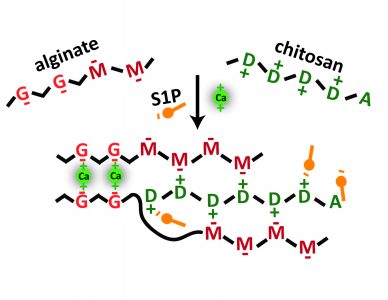 Description of how the system may work to retain S1P by providing interactions with chitosan. (Credit: Priscilla Williams)

The Silva Lab is developing a new alginate hydrogel that incorporates chitosan to control the release of S1P to improve the formation of new blood vessels. In research published in the Annals of Biomedical Engineering, Priscilla Williams and Eduardo Silva added varying amounts of chitosan to a conventional alginate hydrogel loaded with S1P. They then measured the response of outgrowth endothelial cells (OECs) in terms of angiogenic sprouting and directed migration towards the released S1P over four days under hypoxia. They also evaluated blood vessel formation in response to S1P released from the various hydrogels using a chick chorioallantoic membrane (CAM) assay.

They found that as the amount of chitosan increased, hydrogels were stiffer and had denser pore structure. However, while 0.1 and 0.5% chitosan gels also released S1P more slowly, release from the 1% chitosan gels was similar to alginate gels alone. The 0.5% chitosan gels induced greater sprouting and directed migration of OECs. They also led to about 15% more blood vessel formation than the alginate controls did after 24 hours. This suggests that slower S1P release favors angiogenesis and migration of OECs under hypoxia than faster release regimens. This study shows that an injectable hydrogel could deliver S1P into localized ischemic tissue for time-controlled recruitment and enhanced angiogenic function of vascular progenitor cells for therapeutic angiogenesis.

“In our lab we target vascularization as a critical enabling technology to engineer or regenerate virtually any tissue or organ system. We are very excited with this manuscript because it provided us greater understanding the capabilities of a novel hybrid alginate-chitosan material system to maintain a spatiotemporal control of S1P release. Ultimately, such knowledge has the potential to provide more predictive information for the development of novel delivery systems that could orchestrate neovascularization strategies,” said Silva.