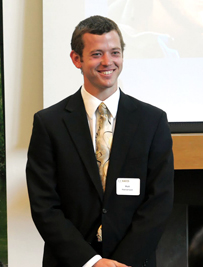 Biomedical Engineering major Matt Halverson has been named the UC Davis College of Engineering’s 2012 Ghausi Medal Recipient. The Ghausi Medal is the highest honor the College bestows upon a graduating senior. The Medal recognizes Matt’s grades and overall academic excellence. Matt is the fourth biomedical engineering student since 2006 to win the Ghausi Medal.

“Matt clearly is the best undergraduate I have ever met in more than thirteen years of student supervision,” said Professor Volkmar Heinrich, who taught one of Matt’s classes and invited him to work in his lab. “His boundless curiosity and quick grasp of complex concepts, combined with a rare maturity and a highly motivated, disciplined approach to academia, have left a deep impression on every instructor who has had Matt in class.  After only a couple of weeks in my lab, we decided to have him start on his own independent project: the quantitative characterization of the phagocytosis of yeast particles and antibody-coated beads by human neutrophils using flow cytometry.  Nobody in my lab had used a flow cytometer before, so it was up to Matt to learn not only how to operate the cytometer, but also how to design, perform, and analyze the experiments that would give us the sought information. This was a graduate-level project. His exciting results have not only considerably advanced my NIH-funded project on phagocytosis mechanisms but also helped me secure a supplement for the purchase of our own flow cytometer in 2010.”

Matt decided to study biomedical engineering because, “You get to study science and apply engineering to develop medical technologies – satisfy your inner science nerd and feel good about advancing the state of medicine! Biomedical engineering turned out to be tougher than I expected, but the original appeal has always remained. The human body is a remarkable and complicated system, and learning to work with it presents immensely interesting challenges.”

In a college career filled with new experiences and hard-earned successes, two accomplishments fill Matt with special pride.  The year he studied abroad in New Zealand, away from his family and friends in California, instilled a whole new level of self-reliance and maturity. Matt is also the 2012 recipient of the Band-uh’s Dave Brown Memorial Award, given annually to a senior band member who embodies the spirit of the Band-uh and has made the organization stronger, more welcoming, and more fun. “I’ve been an active member of the Band-uh since freshman year, and it has helped me stay sane throughout the rigors of the engineering degree. It was great to feel like I’ve given back to the organization that has given me so much,” he says.

After graduation, Matt plans to take a long vacation, visiting Spain and hiking the John Muir Trail through the Sierras. He plans to work for a couple of years as a software engineer before going to graduate school.