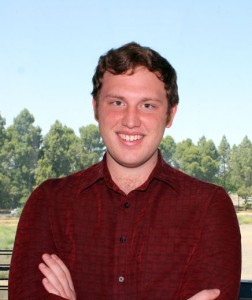 Keegan has done the majority of his research under Professor Marc Facciotti. He joined the iGEM team the summer after his sophomore year, and has participated on the team for the past two years. The International Genetically Engineered Machine (IGEM) competition is an annual synthetic biology competition open to undergraduate students from all disciplines. Students from all over the world work in teams over the summer and present their projects in an event that takes place in November, usually at MIT. Both years, the UC Davis iGEM team won prestigious awards.

Prof. Facciotti, who directs iGEM at UC Davis, says that Keegan’s experience on the 2010 iGEM team left him both excited about synthetic biology and frustrated with what he considered to be fundamental inadequacies with the current state of biological parts. This year, Keegan proposed a solution for the lack of well-characterized biological parts in the Parts Registry, proposed a method to expand individual parts into families of parts, and proposed that the method be demonstrated on a subset of parts. This vision became the team’s project in 2011.

“iGEM was unique,” Keegan says. “The research we did was entirely student-led. We came up with the ideas and all of the protocols and procedures. A lot of research for undergrads on campus is someone tells you what to do and you do it, but this was all self-directed. It was good preparation for the kinds of problems I’ll be solving for the next four years in graduate school.”

The iGEM team also became close friends. “Spending all your time during the summer in the lab, your lab mates become like your family. It’s like a full time job. We joked that we spent more time with each other than with our girlfriends. I’d definitely do it again.”

In addition to the actual lab work for iGEM, Keegan worked on a side project to develop a web-based, cross-platform technology for displaying 3D data on a webpage that can also be used on smartphones.

He also worked with a grad student in the lab of Prof. Jonathan Eisen (Evolution and Ecology and Medical Microbiology) to build a laser etching robot as a modification for the Eisen Lab’s Ultimaker 3D printer. Keegan has been working on the computer visions for the robot. A camera feeds images to the robot that uses the image to know what to do. For their senior design project Keegan’s team is making a lab on a chip—a small device that can run a highly accurate test automatically on a very small sample.

Keegan plans to stick around Davis for the summer to advise this year’s iGEM team, and move to Los Angeles in the Fall to start in the Bioengineering Ph.D. program at UCLA. He will continue his work on microfluidics in the laboratory of Professor Dino DiCarlo. “My iGEM experience was a big part of why Prof. DiCarlo was interested. No one in his lab has that biology background, so it was a big plus,” says Keegan.