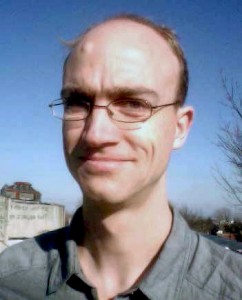 During growth and division, bacteria establish and maintain their cell shapes with high accuracy. This process depends on the cytoskeleton, which consists of polymeric proteins that are often distant homologs of the cytoskeletal proteins found in eukaryotic cells. Using high-resolution microscopy in the model organism Escherichia coli, we show how the bacterial actin homolog MreB is physically and dynamically coupled to the assembly of the peptidoglycan cell wall, which ultimately determines cell shape. Biophysical modeling suggests that this interaction facilitates rod-like cell shape and cell-wall integrity. These findings thus deepen our understanding of the bacterial cytoskeleton and of cellular morphogenesis.