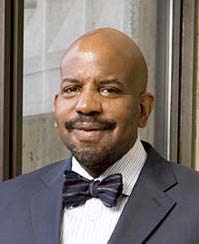 Cato T. Laurencin, M.D., Ph.D., is a nationally prominent orthopaedic surgeon, bioengineering expert, administrator and professor. He is an expert in shoulder and knee surgery and an international leader in tissue engineering research. He is a Fellow of the American College of Surgeons, the American Surgical Association, and the American Academy of Orthopaedic Surgeons, and has been recognized by America’s Top Doctors and America’s Top Surgeons. He is widely published in scholarly journals and holds more than 20 U.S. patents.

President Obama named Dr. Laurencin a 2009 winner of the Presidential Award for Excellence, awarded to science, math and engineering mentors. Additionally, Dr. Laurencin was recently honored by Scientific American Magazine as one of the top 50 innovators for his groundbreaking technological work in the regeneration of knee tissue. He was also recently named among “100 Chemical Engineers of the Modern Era” by the American Institute of Chemical Engineers, and is the 2009 winner of the Pierre Galletti Award, the American Institute for Medical and Biological Engineering’s highest honor.