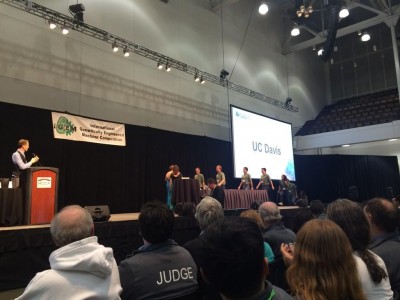 UC Davis is announced as the grand prize in the 2014 iGEM competition.

As much as two-thirds of the extra-virgin olive oil sold in the United States is actually much lower-grade oil, lacking the antioxidants, omega-3 fatty acids, and flavor found in true extra-virgin olive oil. To date, however, there is no reliable way to determine which oils are fresh and which are stale. The team first obtained and engineered several NAD+ dependent aldehyde dehydrogenases to have specificity for aldehydes commonly found in rancid oils. They then optimized an electrochemical system to detect the enzymes’ activity. After validating that their system could detect enzyme activity, they developed a mathematics and software suite that allowed them to connect measured aldehyde profiles to the degree of rancidity in an olive oil. The team believes that their sensor could eventually retail for as little as $125. 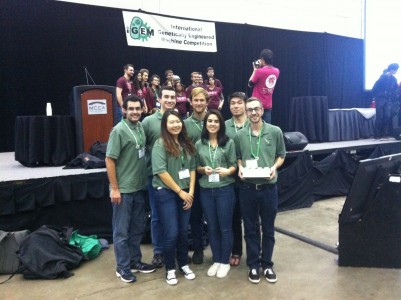 The 2014 UC Davis iGEM team with their Grand Prize.

This year over 250 college and community lab teams and more than 2500 people competed in Boston. The UC Davis team was the only team from the United States that made it to the championship. There are two divisions “undergrad” and “overgrad”, separated by age UC Davis won the grand prize in the overgrad division. The team was also recognized with an award for “Best Advance in Policy and Practice”, which the team received for reaching beyond the science and engineering in structuring their project.

The students were judged on their Wiki, a 20 minute oral presentation, and 2-2.5 hour poster sessions. Panels of judges grilled teams in person on the latter two. Six finalist teams were nominated. UC Davis was the only US team in the finalist group. Each of the finalists then had to present again in front of ~2500 people before final judging took place.

“This is a very tough competition with some extraordinary student work by many teams. All of the finalist projects were really amazing! The group worked very hard over the summer to show proof of principle for an electrochemical biosensor to detect rancidity in olive oil,” said Marc Facciotti, one of the team’s faculty advisors. 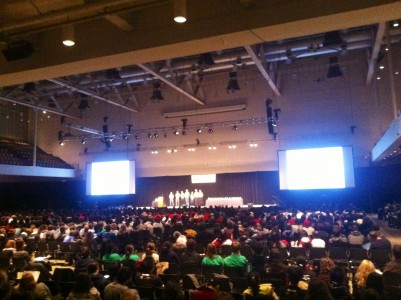 Aaron Cohen, a BME major on the iGEM team, was interviewed on a segment of NPR’s “Science Friday” (11/7/14) show devoted to synthetic biology: http://www.sciencefriday.com/segment/11/07/2014/opening-up-the-synthetic-biology-toolkit.html

For more, please see the iGEM team’s wiki at: http://2014.igem.org/Team:UC_Davis