Not long after white blood cells were discovered, scientists like Rudolph Virchow and Paul Ehrlich pioneered their use as diagnostic tools.  To this day, physicians use counts of white blood cells to identify infections and help diagnose hidden medical conditions.  Such tests rely on the unique aptitude of leukocytes to detect invasive pathogens or other immune threats.  But how great must a threat become before the cells can detect it?  In other words, how sensitive are the white blood cells?

In recent collaborations with immunologists and clinicians of UC Davis, the Heinrich lab has carefully examined the response of single human neutrophils (the most abundant type of white blood cell) to real-world pathogens like Salmonella bacteria or Coccidioides fungi (the cause of Valley fever).  The basic idea behind the experiments is straightforward:  pick up an initially passive immune cell with a micropipette and arrange one-on-one encounters with a suitable target particle.  To witness the ensuing battle is often a thrilling and highly satisfying experience.  Instructive time-lapse videos of neutrophils in action can be enjoyed on YouTube or as part of the popular textbook “Molecular Biology of the Cell”. 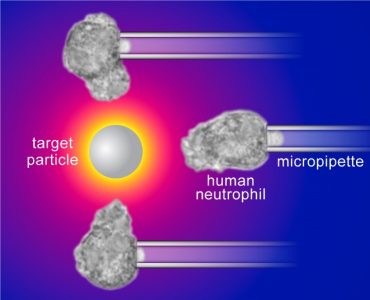 The concentration profile of anaphylatoxins around the target particle is shown as a yellow-to-blue color gradient.

Recently, an intriguing observation caught the attention of the Heinrich group.  Under certain conditions, the immune cells were able to sense the presence of target particles before even touching them.  In these cases, the neutrophil appeared to reach toward the target particle from a distance.  By moving the target to different sides of the cell, the researchers triple-checked that the cell response was indeed specific to the nearby particle.  But how does this chemotactic recognition work?  What is it that the cells actually detect?  Immunology textbooks offer a variety of answers to this question, often without clarifying which type of response is most relevant in a particular case.  The UC Davis researchers have established that in the presence of donor serum, this recognition of both bacterial as well as fungal targets is predominantly mediated by small peptides called anaphylatoxins.  These chemoattractant peptides do not originate from the pathogenic microbes themselves.  Instead, special serum enzymes (assembled on the pathogen surface by the host’s complement system) produce and release the anaphylatoxins.

The Heinrich lab has soundly validated that even single human neutrophils can reliably report the presence of anaphylatoxins.  Currently there seem to be no other techniques that can detect these chemicals near individual target particles with a similar sensitivity.  But the bioengineers didn’t stop here.  Their logical next step was to design and perform experiments that allowed them to quantify the sensitivity of the biodetector “human white blood cell” to anaphylatoxins. 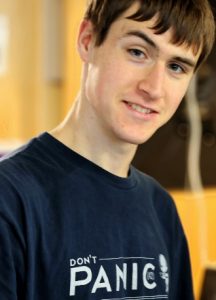 Emmet Francis, an undergraduate researcher in the Heinrich Lab and first author of the paper in Biophysical Journal. He is currently a senior.

These new experiments were performed by undergraduate researcher Emmet Francis, who at the time was in his junior year.  Emmet is the first author of a publication about this work appearing in the March 2017 issue of the Biophysical Journal (published ahead of print at http://dx.doi.org/10.1016/j.bpj.2017.01.009).  In a typical experiment, Emmet first positioned a human neutrophil and a suitable target particle at a large distance from each other.  He then gradually reduced the distance until a cell-morphology change signaled that the cell had started to sense the chemoattractant surrounding the particle.  Repeating this experiment with larger target particles, Emmet measured a significant increase of the recognition distance.

The researchers analyzed these measurements in terms of a mathematical model that realistically accounts for the production, diffusion, and removal of the chemoattractant.  A closed-form solution of this mathematical problem predicts the concentration profile of anaphylatoxins around the target particle (shown as a yellow-to-blue color gradient in the picture).  In this manner, the authors were able to convert the measured recognition distances into the concentration threshold of anaphylatoxins that triggered the cell response.  This result is the first quantitative estimate of the sensitivity of human immune cells to a chemoattractant.  In their concluding sentence, the authors state that “this study demonstrates how superb experimental control over one-on-one encounters between immune cells and pathogenic targets, in conjunction with realistic mathematical modeling, provides key insights into mechanisms of vital cellular behavior that are inaccessible to traditional biological methods.”