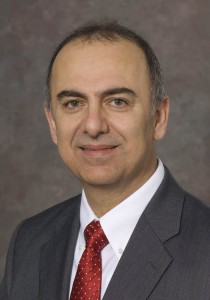 On November 27 the President of the Republic of Cyprus presented Kyriacos Athanasiou, The Child Family Endowed Chair in Engineering and Distinguished Professor of Biomedical Engineering and Orthopaedic Surgery at UC Davis, with the Nemitsas Prize, the highest honor a Cypriot scientist can receive, and one of the most prestigious awards in the European Union. For this reason, it is often called the “Nobel Prize” of Cyprus. The winner receives a certificate, a solid gold medal, and a monetary award of €50,000.

Founded in 2009, The Takis and Louki Nemitsas Foundation presents an award to a Cypriot who lives in Cyprus or abroad and whose discoveries, inventions or artistic accomplishments offer outstanding benefits to not only Cyprus but the world. Eligible categories include engineering, environmental sciences, seismology, health and medicine, and the arts. The first award was given in 2010.

Dr. Athanasiou received the award to honor his numerous achievements in the field of biomedical engineering and tissue engineering. A device he co-invented, the EZ-IO kit, saved countless lives in the cholera epidemic that swept Haiti after an earthquake devastated the country in 2010. The kit is a drill that helps health care personnel insert IV lines directly into the bones of people whose veins are inaccessible due to severe dehydration or shock. He also invented and marketed a device that prevents diabetic ulcer-related amputations. In addition to these, Dr. Athanasiou founded Osteobiologics to market, for the first time anywhere, an implant his group developed that uses acellular scaffolds for the treatment of focal cartilage lesions.

Born in Larnaka, Cyprus, Dr. Athanasiou attended Sotir Elementary School and St. George High School, from which he graduated as the valedictorian. Following his mandatory military duty, Dr. Athanasiou came to the United States to attend college. He spent his first year at Brescia College in Owensboro, Kentucky before moving in with relatives in Long Island, New York. He received his Bachelor’s degree in Mechanical Engineering from New York Institute of Technology at Old Westbury and his Doctor of Philosophy degree from Columbia University. After serving as a professor of Orthopaedics at the University of Texas Health Science Center, San Antonio, and as a professor in the Biomedical Engineering Program at the University of Texas at Austin, Dr. Athanasiou joined the Bioengineering Department at Rice University, where he served as the Hasselmann Professor of Bioengineering until 2009. Since then, he has been Distinguished Professor and Chair of the Biomedical Engineering Department at UC Davis and holds a joint appointment as a Distinguished Professor of Orthopaedic Surgery in the UC Davis School of Medicine.

“It is always wonderful for someone to receive recognitions for his or her work in the form of awards, honors, or prizes. The Nemitsas Prize is particularly important to me because it is the highest award from the land where I was born and reared. It is even more important to me because my entire family, including my mom, were in the audience when the President of Cyprus presented me with this great honor. It was with great humility and respect that I dedicated the Nemitsas Prize to my beloved mother and late father,” Dr. Athanasiou said.

Dr. Athanasiou currently seeks to discover clinically acceptable solutions to treat cartilage injury and diseases. His laboratory strives to ensure that engineered and processed tissues have biomechanical function akin to the native tissue. His group has successfully fabricated sections of articular cartilage by the self-assembly of cells, without the use of any scaffolds. Recently, his group has shown that the biomimetic cartilage it produces is biocompatible, stable, and continues to mature once it has been implanted.