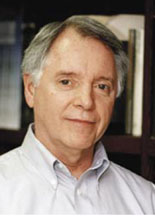 Michael Savageau, Distinguished Professor of Biomedical Engineering at UC Davis, has been made an IEEE Fellow, for application of systems engineering concepts to molecular biology. IEEE Fellow is the highest grade of membership and is recognized by the technical community as a prestigious honor and an important career achievement.

Dr. Savageau is one of the pioneers in the field of systems biology. The focus of research in Professor Savageau’s laboratory is on quantitative systems biology aimed at further elucidation of biological design. Specific goals include elucidating the design features in elementary gene circuits, enlarging the scope of the search for predictable patterns of gene circuitry to include different mechanisms of signal transduction and control by global regulators, and continuing the development of new methodologies for the quantitative analysis of large genomic-scale systems. His book, Biochemical Systems Analysis: A Study of Function and Design in Molecular Biology, is considered a classic and forerunner to the field of functional genomics.

The IEEE distinction adds to Dr. Savageau’s long list of honors, the most recent of which was an honorary Ph.D. from the University of Lleida, Spain, in 2011. He is also a Guggenheim Fellow and Fulbright Senior Research Fellow at the Max-Planck-Institut für Biophysikalische Chemie, in Göttingen, Germany; and the Institut des Hautes Études Scientifiques Award from Bures-sur-Yvette, France, as well as an American Association for the Advancement of Science Fellow, and a member of the National Academies of Science Institute of Medicine.