(DAVIS, Calif. Aug. 3, 2017) Adult spinal cord injuries often result in permanent loss of mobility because the nervous system can’t completely heal spinal connections. Researchers have focused on two approaches to recovering movement: healing the injury, or bypassing it to reconnect motor circuits above and below. Both approaches assume that the adult nervous system can’t develop its own way to bypass the injury.

Karen Moxon, a professor of biomedical and mechanical engineering at UC Davis, questioned that assumption and in a new paper published in eLife, shows that a combined therapeutic regimen of drugs and physical therapy promoted cortical reorganization that bypassed the injury, allowing paralyzed rats to walk again. 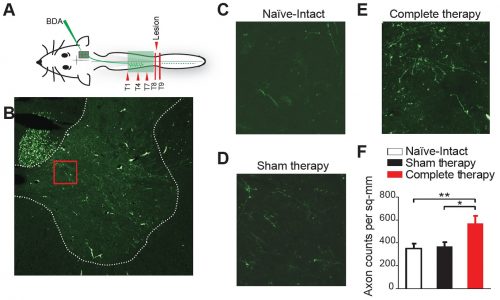 Corticospinal sprouting into the thoracic spinal cord. (A) Diagram illustrating anterograde tracing experiments. (B) Histology of a sample coronal slice of the thoracic spinal hemi-cord taken from above the level of the spinal lesion and a magnified view of the sprouting into the grey matter in (C) Naïve-Intact (D) Sham therapy and (E) Complete therapy groups. (F) Bar graphs showing the average count of corticospinal axons sprouting per mm2 of gray matter of the spinal hemi-cord for the different groups. *p<0.05, **p<0.01. Error bars indicate 95% confidence intervals. (Credit: Karen Moxon)

Tests on the brains of rats which regained movement revealed that the motor cortex had reorganized itself to bypass the injured region of the spinal cord. Corticospinal fibers from the reorganized motor cortex sprouted into the cord above the lesion after therapy, forming an entirely new motor pathway.

Further investigation suggested that involvement of both fore and hindlimbs in the physical therapy encouraged more neurons to grow than in either partial or no therapy.

The results of this study suggest that the treated rats learned to activate the muscles in their trunks to reduce the load on the hindlimbs while balancing on the forelimbs.  This allowed neural circuits in the spinal cord that are responsible for producing stepping motions below the level of the lesion to be activated, resulting in weight-supported hindlimb stepping.

Although the study presents a tantalizing possibility for human motor recovery, Moxon warns that these results might only apply to quadrupedal locomotion. Humans, who walk bipedally, might not obtain the same level of benefit. However, the study lends strong support to the idea that whether in humans or rats, well-designed treatment plans that combine drugs with physical therapy can have synergistic effects on cortical plasticity and recovery.