An interdisciplinary study by UC Davis researchers that appeared in the March 13 issue of the prestigious journal Science Signaling attests to the growing recognition that innovative concepts and approaches developed by bioengineers and biophysicists can help tackle vital scientific questions that are inaccessible to traditional biological methods. 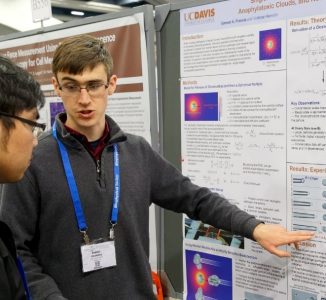 Emmet Francis, currently a 1st-year PhD student in the BME program at UC Davis, was an undergraduate researcher when he performed the work that earned him first authorship on the Science Signaling study. In this photograph he can be seen presenting his research at the 2018 Biophysical Society meeting.

The study pursues two interwoven lines of questioning. One examines the chemotaxis mechanisms by which human immune cells recognize and home in on pathogens such as infectious agents or cancer cells. In view of the debilitating impact of epidemic infectious diseases, and the rapidly rising popularity of cancer immunotherapies, a better understanding of how immune cells find their targets from a distance is sorely needed. The chemical messengers studied in the paper are called anaphylatoxins. They provide a highly potent signal that guides immune cells toward nearby pathogenic microbes, but as their name suggests, excessive amounts can cause severe problems and even be fatal.

First author Emmet Francis did experiments in which he exposed individual neutrophils (the most abundant type of human white blood cell) to various amounts of anaphylatoxins and analyzed the cells’ chemotactic response.  Among other interesting results, he found that chemotaxis by these cells stalls when they encounter too high levels of anaphylatoxins, which strikingly resembles a phenomenon known as neutrophil paralysis in sepsis. This could provide an instructive new window into the behavior of immune cells during sepsis and other pathological conditions.

Enabled by a combination of fluorescence imaging and micropipette manipulation of cells and targets, the second 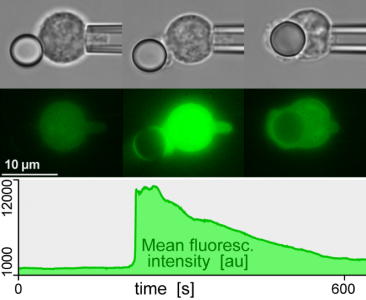 A micropipette-held human neutrophil that had been preloaded with a green fluorescent Ca2+ indicator is brought into contact with an antibody-coated microsphere. As the cell proceeds to engulf this target particle by phagocytosis, a dramatic spike in the mean fluorescence intensity is observed, reflecting a sudden burst in the intracellular Ca2+ concentration.

line of questioning addresses the role of calcium surges in vital immune cell functions. Neutrophils and other immune cells are known to exhibit sudden cell-wide bursts in intracellular Ca2+ that rapidly increase the Ca2+ concentration several-fold. Such Ca2+ bursts are among the most conspicuous signaling events known and transmit a signal from one side of the cell to the other in record time.

However, even though Ca2+ ions participate in the regulation of numerous cellular functions, the exact physiological role of these bursts is unknown. Emmet’s experiments confirmed that such bursts always accompany phagocytosis of various targets by nonadherent neutrophils. Surprisingly though, Emmet also showed that the stimulation of these cells by physiological levels of anaphylatoxins does not cause Ca2+ bursts, and that the extension of chemotactic cellular pseudopods toward pathogenic targets does not require these signaling bursts. These findings invite a careful reevaluation of the common view that Ca2+ bursts mediate the rearrangement of the cells’ cytoskeleton in response to purely chemotactic stimulation.

Emmet, whom the College of Engineering honored with the 2017 Ghausi Medal, is currently a 1st-year PhD student in biomedical engineering at UC Davis. He started working on this project in his sophomore year and did most of the experiments as an undergraduate volunteer researcher. In addition to Emmet, the article has only one other author, principal investigator Volkmar Heinrich, which reflects the high quality of undergraduate research and mentoring available at UC Davis.

The study, entitled, “Extension of chemotactic pseudopods by nonadherent human neutrophils does not require or cause calcium bursts”, was published online in the March 13 issue of Science Signaling (http://stke.sciencemag.org/content/11/521/eaal4289).

Several movies featuring Emmet’s research can be viewed at the Heinrich lab’s YouTube site at https://www.youtube.com/user/HeinrichLab.