Steve Rendig: A Legacy of Cardiovascular Research and Biomedical Imaging at UC Davis 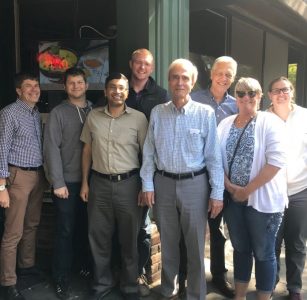 Steve Rendig’s retirement from the Center for Molecular and Genomic Imaging (CMGI) caps a 46-year career of advancing cardiovascular research and contributing to the successful development of the new imaging center as its first technical/imaging manager.

Steve’s research career began in 1968 when he received his U.C. Davis bachelor’s degree in Biological Sciences. He’d always been interested in pursuing a career in scientific research in the biomedical field, and that degree opened the door for what was to come.

“I’d always enjoyed working with my hands and was particularly attracted to being part of a research team,” he said.

After two years of service in the Peace Corps in Ghana, Steve returned to Davis and joined a U.C. Davis cardiology research lab as a staff research associate (SRA). During his 30-year tenure in this position, in addition to earning his Master’s degree in Physiology, Steve:

Beginning in 1987, Steve also served as the laboratory manager for the Division Chief of Cardiology and supervised his physiological laboratories and its workforce of a bioengineer, post-doctoral fellows, graduate students, staff and undergraduate student helpers.

MAKING A DIFFERENCE WITH IMAGING

Steve was selected for the supervisory SRA position, which had been created to help set up and manage a new small-animal imaging facility under the supervision of [U.C. Davis Biomedical Engineering Faculty Member] Dr. Simon Cherry.

“This was to be the first facility on campus to be a resource for the research community in the relatively new field of preclinical and molecular imaging,” said Steve.

Steve started off in an early Academic Surge-space version of what would become the full-size imaging facility, but he eagerly started his work providing small-animal imaging services to investigators on campus, other academic institutions and private industry, including Genentech.

“I still remember a late afternoon in 2002 in that lab when I injected FDG [fluorodeoxyglucose] into a mouse tail vein and we acquired our first successful PET [positron emission tomography] image of a live mouse on the experimental MicroPET 2 scanner recently built in Simon’s lab,” he said. “The champagne corks were popped and we celebrated the event, and I remember thinking how lucky I was to be working with this group – a thought I’ve had many times through the years.”

Steve set up a PET imaging suite at the Primate Center and for two years performed and managed imaging studies at both locations, which included included PET imaging of rats, mice, rhesus monkeys and even the first PET brain scans of turkeys. In 2004, Steve and the rest of imaging/radiochemistry team moved to the new GBSF location and the brand-new imaging facility named by Dr. Cherry: the Center for Molecular and Genomic Imaging. It was a busy time as the team brought in new imaging equipment, made adjustments and improvements to the facility, and performed more imaging procedures with an expanding menu of radiotracers “thanks to [CMGI Radiochemistry and Cyclotron Facility Manager] Dave Kukis.”

CMGI clientele grew and the team began hosting two-day UC Davis Small-Animal Imaging Workshops attended by researchers from around the country and the world, helping showcase both the field of molecular imaging and the CMGI facility. Steve’s many duties at the world-class facility included:

Although Steve enjoyed his CMGI work and talented team of coworkers, after all of these many years of research-based public service, retirement called. But his service was far from over.

“Simon asked if I’d consider working part-time to assist during newly hired [Principal Research Scientist] Doug Rowland’s transition as my replacement,” Steve said. “I jumped at the opportunity to continue working at the CMGI.”

Steve imagined his transitional position would be a two-year commitment at most, but that part-time position turned into 12 additional years of twice weekly, then one-day-a-week CMGI service, performing key tasks such as working on the CMGI website, brochures, slides, posters, an article – “Imaging the Molecules of Life” for the UC Davis College of Engineering’s Engineering Progress magazine – as well as preparing client billing and related administrative services.

“I have to say that my single work day per week has often been one of the most enjoyable and satisfying days of the week – it’s always been a day I looked forward to,” he said. “Teamwork has been a particularly important part of the daily operations of the CMGI, and the exceptional team players and teamwork here have been a key component of the CMGI’s success over the years.

“It’s good to know that, in the team’s very capable hands, the CMGI will continue to innovate and prosper for many years to come.”

“We continue to be inspired by Steve’s dedication toward imaging research and education at our institution, and to CMGI’s core mission of providing state-of-the-art imaging technology to our users,” said CMGI Director Dr. Abhijit Chaudhari. “Our staff knew that they could always turn to Steve for insightful advice, not just regarding scientific or work-related matters, but also regarding career development and personal matters. We remain thankful to Steve for his service to CMGI.”

A WORLD OF CHANGE

During his ongoing part-time CMGI service, Steve and his wife began travelling throughout the world and look forward to continuing their voyages. But Steve and his coworkers also have helped change the world – and people’s lives — for the better.

“The services of the CMGI have allowed investigators to make significant advances in both basic scientific and applied medical research, most notably in the areas of cancer research,” he said. “I’ll miss being a small part of that team.”

We’ll miss you too, Steve.