Arshia Firouzi and Gurkern Sufi met in 2011 as Freshmen living in Tercero Dormitories at UC Davis and quickly became friends. Arshia majored in Electrical Engineering and Gurkern in Biotechnology, and they worked with the mentorship of Professor Marc Facciotti to explore their shared interest in the intersection of electronics and biology. In 2015 they won a VentureWell grant for a research project, which they pursued in TEAM’s Molecular Prototyping and Bioinnovation Laboratory. By the end of their project, they had come up with an idea that grew into a company that could usher in a new era for laboratories all over the world.

“Our experiences at UC Davis working in the TEAM space emboldened us to take a risk and start the company we dreamed of,” said Arshia. 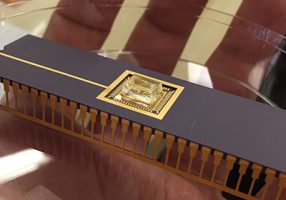 Ravata Solutions is developing a device to revolutionize the production of transgenic animals. A transgenic organism has had their genome altered to better serve as a model for human ailments. Ravata’s technology replaces microinjection, the current standard for embryo transformation. Microinjection is a decades-old technique in which a technician manually injects embryos with various reagents to produce a genetic change. The work is slow, laborious, and costly.

In October, 2016 Ravata was accepted into the IndieBio accelerator program in San Francisco. Over the next four months Arshia and Gurkern built partnerships with the Lawrence Berkeley National Lab, VIB Life Sciences, and the UC Davis Mouse Biology Program to create a prototype and are working with their partners in the US and Europe to run pilot programs.

Ravata’s device takes advantage of single cell sensing and electroporation to deliver reagents into embryos in a fast, viable, and efficient manner. The fully-automated technology can reach throughputs of over 100X that of microinjection. The device can perform up to 1,000 embryo transformations/hour, with over 80% viability of embryos and over 80% efficiency. Ravata plans to launch their product in 2018.

“I hope someday our table-top technology will be available to genetic engineers in any lab just like you would expect to find a centrifuge,” said Gurkern.