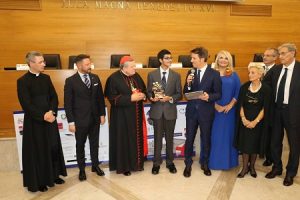 Abraham and other recipients of the international award were honored with an October 27 ceremony at the Vatican’s Pontifical Urbaniana University featuring 550 guests including awardees and their families, dignitaries, government and military officials and press from Vatican, Italy and Greece and the family of Giuseppe Sciacca, whose legacy the award honors. The awards were given by the American Cardinal Prelate His Eminence Raymond Leo Burke, Deputy Prime Minister of Italy and the Minister of Interior Matteo Salvini, President of Giuseppe Sciacca Foundation Professor Don Bruno Lima and Secretary-General Dr. Vicky Bafatakis.

Abraham had heard in May that he would be an award recipient and received further word in August that he would be receiving the Vinccitore Assuluto Award. In addition, Abraham’s sister Tiara was honored with her own Sciacca Award for inspiring youth around the world with her contributions to music.

“I’ll always remember being in the Vatican, receiving the award and a standing ovation from the hundreds of attendees and dignitaries – it was a humbling experience,” said Abraham. “I’ll also remember the happiness on my parents’ faces – they and my sister have been my support, and this award is for them, too.”

The international Giuseppe Sciacca Award was created in 2001 by the International Association of Culture and Voluntary Work “Uomo e Societa” [Man and Society]. The Vatican-sponsored honor is named after the architecture student Giuseppe Sciacca, who died young but lived long enough to be proposed as an exemplary role model to the new generations. The prestigious award recognizes the contributions made by people around the world who have distinguished themselves in various fields of science, arts, sports and humanitarian work. It is divided into two categories: young scholars and artists (under the age of 35) awards and jury awards. An overall winner is chosen, who over the years has been a genuine moral and educational example in society’s development. Once the nominations for the candidates are made, it takes about six months for the jury to decide the final winners.