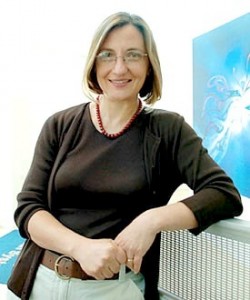 Laura Marcu, a professor in the UC Davis Department of Biomedical Engineering, has been named “Domain Leader” of the UC Davis branch of the University of California BRAID (Biomedical Research Acceleration, Integration and Development) Center for Accelerated Innovation. The new center — teaming the campuses at Davis, Los Angeles, Irvine, San Diego and San Francisco — is one of three inaugural, multi-institution National Institute of Health Centers for Accelerated Innovation (NCAIs) established through the NIH’s National Heart, Lung and Blood Institute (NHLBI), via grants totaling $31.5 million.

The NCAIs will target technologies to improve the diagnosis, treatment, management and prevention of heart, lung, blood and sleep disorder and diseases. The new centers will provide an integrated, systematic and comprehensive approach to navigating the translation of early-stage biomedical innovations from the research laboratory to commercial development, and the subsequent deployment to patients. Each center will be a consortium of academic, government, nonprofit and private-sector organizations that will provide funding for feasibility studies; regulatory, legal and business development expertise; and entrepreneurial training and mentorship.

According to the 2012 NHLBI Fact Book, in 2009 the estimated economic cost for cardiovascular, lung and blood diseases was $424 billion: 23 percent of the total economic costs of illness, injuries and death in the United States. In addition, cardiovascular and lung diseases accounted for three of the four leading causes of death in the United States, and four of the 10 leading causes of infant death.

In addition to her responsibilities as UC Davis Domain Leader, Marcu also has been named Co-Leader for Devices and Tools. Her laboratory has developed time-resolved fluorescence spectroscopy and imaging systems (instrumentation and data/image analysis techniques) for in-vivo tissue interrogation, along with near-real-time tissue diagnosis. The applications of such systems include clinical studies for the characterization and diagnosis of atherosclerotic plaques at high risk.

Marcu completed her undergraduate work at Romania’s Polytechnic Institute of Bucharest, and then earned her master’s degree and doctorate, both in bioengineering, at USC. She joined UC Davis in 2006. Aside from her faculty responsibilities in the Department of Biomedical Engineering, she holds a joint appointment as a professor of neurological surgery in the UC Davis School of Medicine, and serves as co-leader of the UC Davis Cancer Center’s Biotechnology Program.