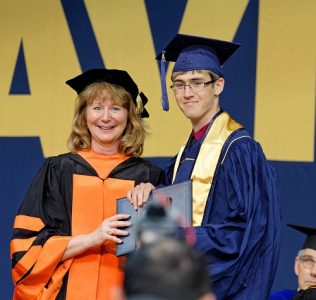 College of Engineering Dean Jennifer Curtis presents Emmet Francis with his diploma and the Ghausi Medal.

DAVIS, Calif., June 20, 2017. The M.S. Ghausi Medal – named for Mohammed S. Ghausi, a former Dean of the College of Engineering – is awarded each year to one outstanding graduating senior. This year, the 2017 Ghausi Medal went to Emmet Francis from the Department of Biomedical Engineering.

A Regents Scholar, Emmet stands out among the top students in his department and the College of Engineering. His nominators noted that he is exceptionally bright, but at the same time humble, unfailingly friendly, and utterly reliable.

Emmet came to UC Davis as an Undeclared student in the College of Biological Sciences, but quickly developed a passion for Biomedical Engineering and decided to switch majors. After participating in lab tours organized by the BMES student chapter at UC Davis, he reached out to Prof. Volkmar Heinrich and began researching in the Heinrich lab toward the beginning of his sophomore year. That summer, Emmet engaged in full-time research, investigating calcium dynamics in human neutrophils during chemotaxis and phagocytosis. 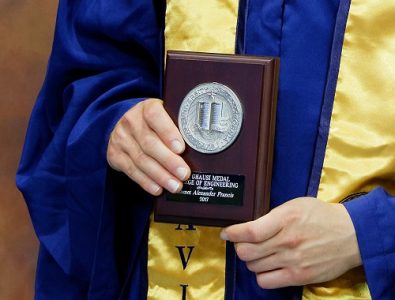 The M.S. Ghausi Medal – named for Mohammed S. Ghausi, a former Dean of the College of Engineering – is awarded each year to one outstanding graduating senior. This year, the 2017 Ghausi Medal went to Emmet Francis from the Department of Biomedical Engineering.

For Emmet, this research led to a podium talk at an international conference, as well first-authorship on a paper currently in revision for publication in Science Signaling. After expanding the scope of his research in the Heinrich Lab, Emmet achieved authorship on two additional high-impact published manuscripts. Emmet’s accolades also include a Provost’s Undergraduate Fellowship (PUF), travel awards from the Biophysical Society and the UC Davis Undergraduate Research Center, a poster presentation at the 2017 Biophysical Society Annual Meeting, and a talk at the 2017 UC Davis Undergraduate Research Conference.

In the fall, Emmet will pursue a Ph.D. focusing on cellular biophysics in the College of Engineering at UC Davis. Despite receiving offers from other graduate schools, he decided to stay in Davis so he can continue pursuing his research interests in the Heinrich Lab. He plans to continue working with neutrophils, while redefining his research to focus on mathematical modeling and cell mechanics. Emmet hopes to someday become a professor, so he can instruct a new generation of scientists and supervise his own research lab.